After the economic crisis, what does the future hold for pharmaceutical companies in Europe?

The pharmaceutical sector's dependence on the economic situation of European countries proved to be crippling for the industry during the 2008-09 crisis, and once again during the sovereign debt crisis of 2011-12. Particularly weakened by reduced health expenditure in Europe, pharmaceutical companies are now looking to revive, expand into new markets and invest in niche markets to break the deadlock.

The economic crisis, an accelerator of change in the pharmaceutical sector

The economic crisis has had a strong negative impact on drug consumption in Europe, despite an aging population. In fact, governments, as the principal financers, have been forced to curb their health expenditure to contain the increase in their debt, and have therefore limited the reimbursement of drugs. Consequently, the share of GDP spent on drugs fell between 2003 and 2011, from 14.9% to 13.4%. In addition, a pro-generic drug policy has been promoted at the expense of pharmaceutical companies, with doctors being encouraged by the authorities to prescribe generic drugs and consumers turning to these better reimbursed drugs. Finally, the interdependence of European countries in terms of pricing is fuelling the trickle-down effect of this reduced health expenditure. 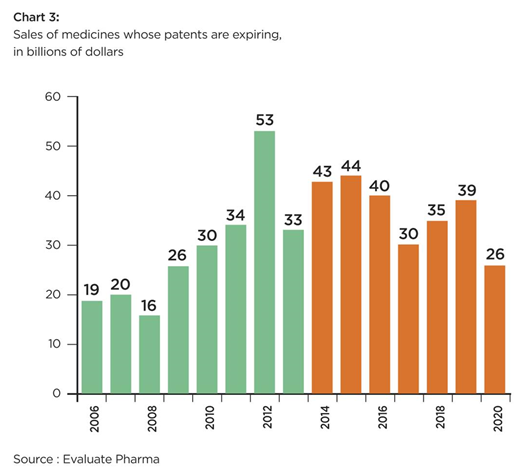 The 1980s was a very successful period for the research and development of drugs known as "blockbusters" on the market. In the early 2000s, many of these molecules reached the end of the protection provided by their patents. Some pharmaceutical companies then saw a significant percentage of their revenues threatened by the emergence of generic drugs on the market. Since 2010 this "patent cliff" has been accelerating and will be considerable until 2020, with an expected peak between 2014 and 2016.

The birth of a new model focused on "pharmerging"

Today more than ever, public authorities are regulating the entire process of placing drugs on the market. This is illustrated by pricing policies such as "Value Based Medicine" . Pharmaceutical companies now have to prove that, in addition to therapeutic effectiveness, a new molecule brings value to the patient in terms of quality of life.

These hurdles slow down the process of placing drugs on the market and are likely to reduce the reimbursement value of products of pharmaceutical companies, who are simultaneously facing the competitive force of generic drug manufacturers. Generics now account for over 50% of market share in terms of sales volumes (in 2013, the ratio was 46%-54% in favour of generic drugs). These generic drugs, which are created from molecules that have fallen into the public domain, do not have to bear the cost of R&D and can therefore be priced significantly lower than the original drugs.

In order to boost their productivity, pharmaceutical companies are moving towards emerging countries, whose aging populations make them future growth markets. Furthermore, the latest health policies of newly industrialised countries are facilitating greater access to care.

""Pharmerging" is becoming a new Eldorado for European pharmaceutical companies. Unlike developed countries, drug sales in emerging countries should experience double-digit annual growth by 2017. This potential will partially offset the effects of the budgetary restraint policies in Europe. Major industry groups are now gaining the growth they lacked in emerging countries", explains Khalid Aït-Yahia, sector economist at Coface.

Another train of thought also being adopted by pharmaceutical companies is that of moving R&D to a smaller but better valued market. The niche of the most complex diseases is attracting strategic repositioning for the pharmaceutical sector. This highly targeted development involves diseases for which treatments are very expensive and often borne by governments. Pharmaceutical companies are planning their growth in complex treatment areas such as oncology, diabetes and cardiovascular diseases. In Europe, this prospect is becoming a reality for pharmaceutical companies thanks to close cooperation with major worldwide research centres, which are the main generators of fundamental research in understanding diseases that are difficult to treat.

Preuzmite ovu objavu za javnost : After the economic crisis, what does the future hold for pharmaceutica... (308,50 kB)