Although dynamic, France's organic food sector could be forced to abandon its original principles in order to increase scale

France's organic food sector has been experiencing double-digit growth since 2014. This upward trend was confirmed during the first half of 2017 and suggests that there will be a growth of almost 14% for the entire year which will represent a turnover of over 8 billion Euros, according to Coface’s estimates. Despite its still-modest share (3.5% in 2016) in the agrofood market, the consumption of organic food is increasing in popularity. 69% of French people ate organic food at least once a month in 2016 (up 25pp since 2012) and more frequent (15% ate organic food every day in 2016, up 7pp since 2012) [1].

Organic agricultural production is evolving in a particularly cyclical manner, alternating periods of strong growth with stagnation - depending on the measures and aid implemented by public authorities. While the proportion of land used for organic farming in France has increased due to the peak in conversions recorded over the past two years, its share in total utilised agricultural area remains modest (6.5% in the first half of 2017), lower than the European average and far behind Austria, Sweden, Estonia, Italy, and the Czech Republic. A marked increase in supply is expected in the near future, following a wave of farming conversions launched between 2014 and 2016. Nevertheless, the dynamics of consumption are such that the sector will probably need to adapt its farming practices to increase yields and its scale of production. If not, France will be forced to increase imports - which already represent 29% of organic food consumed.

Moreover, although insolvencies in each sub-sector are subject to price trends and shocks specific to each of them, it seems that (all things being equal) the sub-sectors with a larger share of organic farming have shown more resilience. According to Coface, a +10% increase in the share of organic production in each sub-sector's total production would result in an -11% decrease in its business insolvencies.

Change is risky but inevitable

Despite its dynamism and relative strength, the organic food sector needs to change. The direction of this change will largely hinge on its ability to increase yields, which are generally 19-25% lower than those of conventionally-farmed areas. The use of innovations for precision farming (such as sensors and simplifying logistics) and increasing the size of farms could contribute to this. Organic farms in France are slightly larger than the European average (at 48 ha compared to 40 ha) [2] but they are much smaller than non-organic farms (which is not the case in most other European countries). This weakens their economic viability, especially for the most isolated farms.

The desire of some French organic farmers to maintain ‘human-sized’ operations as opposed to conventional ‘intensive’ farming will be challenged in the face of an inevitable trend in farm expansion and the concentration of the organic retail sector. The power of France’s major retail groups is considerable, despite a recent rebalancing of forces. In 2016, the market share of large and medium supermarkets was 45%, down 4pp since 2011, while the share of specialised retail networks was 30%, up by 5pp. While their expansionist strategy could accelerate the organic sector's development and facilitate access to new consumers, it could also increase the risk of organic players becoming highly dependent on the larger retailers, thus risking significant downwards pressure on prices paid to farmers.

The scenario of an organic market that moves away from some of its original principles (such as short transport journeys, low carbon footprint, social anchoring and balanced distribution of the value produced) could become a reality if the transition to market financing is made too rapidly. Market remuneration requires the industry to be mature enough to compensate for the loss of income due to the withdrawal of state aid with an increase in yields. Moreover, potential price increases could have a discriminatory effect against certain categories of consumers - or they could turn to cheaper imported products.

"Ultimately, the increase in the consumption of organic food will necessitate changes in the sector. These changes could either be interpreted as adaptations or as an abandonment of its original principles" concluded Bruno De Moura Fernandes, author of the study"France: will the organic food sector be forced to abandon its principles?". 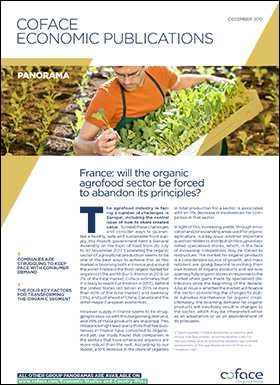 Download this press release : Although dynamic, France's organic food sector could be forced to aban... (135.57 kB)


Publication: France: will the organic agrofood sector be forced to abandon its principles?