South Africa's economy challenged by crises in agriculture and mining, amid fears of an investment downgrade

Still no signs of solid recovery

Concerns over the country’s economic performance have been amplifying, due to its prolonged economic decline since 2011. Despite the slight recovery in 2016, the growth rate remained low. Coface forecasts that the country’s GDP rate will only slightly edge up next year, by 0.8%, after stalling in 2016 due to the effects of serious droughts on agriculture. Private consumption, which accounts for approximately 60% of national GDP, is likely to remain sluggish in 2017. This is mainly due to subdued overall purchasing power, which is expected to continue.

In the meantime, as the South African Government is struggling to reduce expenditure, spending is expected to rise in terms of GDP. State-owned enterprises are the thorn in the side for expenditure reduction programmes, especially in the current scenario of low growth.
Another major problematic for the South African economy is the subdued level of capital investments - which is expected to continue over the coming years. This will only serve to make the achievement of higher investment rates, or improved economic performance, even more difficult.

Investors remain concerned by the country’s rising political tensions, especially with the contested legitimacy of President Zuma. This environment is contributing to the likely risk of a sovereign downgrade and is depressing investor enthusiasm.

Nevertheless, it should be recognised that South Africa is still is one of the region’s leading industrial nations - particularly in terms of manufacturing. Despite weak conditions in domestic and global markets (along with the negative impacts of volatile exchange rates), manufacturing remains a core sector, along with automotives, chemicals, ICT & electronics and textiles & clothing.

As anticipated, the agrofood and automotive sectors represent the two major risk concerns.

The agrofood sector is one of the most sophisticated in the Sub-Saharan region and the Government has made it a top-priority in its ‘New Growth Path’. The sector is one of South Africa’s largest manufacturing segments, providing employment for around 30% of the working population. The country’s well-established food-market ensures a certain stability in terms of demand. Nevertheless, South Africa’s agrofood sector suffers from a number of challenges - leading Coface to rate the segment as very high risk. The main issues are the deteriorating macroeconomic outlook and uncertainties surrounding economic policies, which are increasingly damaging consumer and business confidence.
Other ongoing concerns for the agrofood segment include the likelihood of reduced investments, the unsatisfactory state of rural infrastructures and the weakening of local currency against the US dollar.

The automotive sector could also see increasing risks on the horizon. While it benefits from a number of advantages - such as robust exports, a good geographical position and the strong presence of multinational producers within the national market - South Africa’s automotive segment is faced with a deteriorating economic outlook, high inflation and rising interest rates. These factors are negatively impacting purchasing power and dragging down domestic sales. New vehicle sales could also suffer from fears over the stability of the labour market and the constant threat of strikes.
The weakening of the rand could also put pressure on production costs, which car makers may progressively transfer into their final prices. 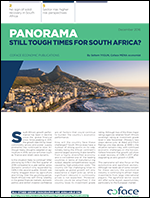