In the face of Brexit, are British businesses left to sink or swim?

One year after the "yes" vote for Brexit, seen as traumatic, the time has come for the United Kingdom to accelerate the implementation of its exit from the European Union (EU). Prime Minister Theresa May wants to have free rein by calling early legislative elections on 8 June, where her victory is expected.

But have British businesses suffered from this decision over the past year? It is clear that the country’s activity and businesses have been globally spared, even though investment has shown signs of decline. The only significant shock has been the sharp depreciation of the pound sterling’s real effective exchange rate in the second half of 2016, which had little positive effect on the activity of exporting businesses but weighed on import costs.

Nevertheless, while growth shows signs of weakening, especially on the private consumption side, will this resistance by businesses last? In terms of visibility, they are not much further ahead today than a year ago. However, there is still a long way to go before the United Kingdom loses its European vote in April 2019, assuming that the negotiations are completed within the allotted time. This path will be fraught with pitfalls, and British businesses will closely monitor the progress of negotiations, as the results of the arm-wrestling match between the United Kingdom and the EU will partly change their rules of the game.

They will thus have to face many challenges. In the short term, lower domestic demand or higher costs will weigh on their activity. In the long term, the weakness of investments, already apparent, should intensify with a decrease in the country’s attractiveness in the eyes of foreign investors and trade and migratory policies could possibly be tightened.

How much will these shocks affect British businesses? This study provides possible answers by considering different scenarios and examines particularly the negative impact on growth of a decline in migration flows with the EU, which is around 0.3 points in 2019 in our “moderate” Brexit central scenario and 0.6 points in the case of an extreme scenario. Overall, sectors like distribution, agri-food, and automotive will be negatively affected in the next five years. Conversely, the energy and pharmacy sectors should be more resistant.

In this uncertain, shifting context, businesses will have no other choice but to adapt their strategies. However, we should keep in mind that the United Kingdom remains an attractive destination and that Brexit is only one determining factor among others in the long-term vision of businesses. In addition, public policies could also play a buffering role. While this uncertain environment seems to be becoming a norm, agility remains the watchword for businesses. 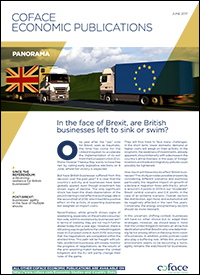 Download this publication : In the face of Brexit, are British businesses left to sink or swim? (945.33 kB)