In the context of a global oil market that is likely to remain volatile, the two largest Latin American economies - Brazil and Mexico - are expected to implement significant changes in their energy policies in the medium term. Both countries have appointed new presidents in the last year following polarised elections: in Brazil the right-wing president Jair Bolsonaro took office in January 2019, while December 2018 saw the arrival of left-wing André Manuel Lopez Obrador (AMLO)1. Similarly, the two oil industries share two main common features: their state-owned companies have experienced significant financial and governance issues, and both countries are crude oil exporters and net oil derivative importers. Conversely, in terms of energy policies, they appear to be taking opposite directions.

In Mexico, AMLO - a fervent critic of the 2013 energy reform that opened the energy market to private investment – appears to be taking a more defensive stance towards the private sector as far as the oil industry is confirmed. Since he has taken office, AMLO has suspended new oil tenders for three years. He also plans to reduce the country's reliance on imported oil derivatives by constructing a new refinery, and to increase the role of the state-owned oil company Pemex in the sector, despite its alarming leverage level. The 14-year downward trend in oil production might not be reverted and the financial stress already faced by Pemex might not be contained. As a consequence, the company’s credit quality ratings were downgraded by ratings agencies this year.

On the other hand, in Brazil, the new government’s plans for the oil industry could lead to a brighter outlook for the sector. The Resilience Plan released by the state-owned oil company Petrobras in early March 2019 aims to improve the company’s financial health as well as the perspectives of the Brazilian oil industry. The plan is structured in three pillars: the expansion of the divestment plan in assets in which Petrobras is not a natural owner (which means focusing in exploring what the company knows how to do well), cost reduction, and the reallocation for more productive uses. These measures should help Petrobras further deleverage, and should also improve the value generation of the company’s investments while creating opportunities for private investors. 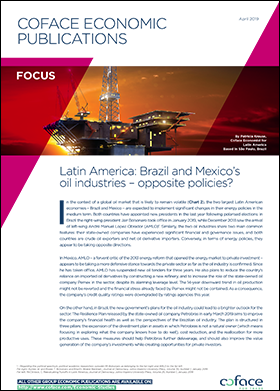 
Press release: Mexico and Brazil taking opposite directions in terms of energy policies