Before the pandemic’s arrival in Europe, a lockdown of factories that temporarily suspended manufacturing in China put the supply of intermediary goods at risk. In order to limit such risks, supply chain managers are likely to diversify their sources of supply. While China is not expected to lose its position of global supplier, the aftermath of the pandemic could bring opportunities for Central and Eastern European (CEE) countries in this diversification process, with a higher share in global supply chains.

Foreign trade and inclusion in supply chains already increased over the previous years. The process was supported by the access to European Union membership by most CEE countries in 2004. Furthermore, the educated workforce, geographical proximity to Western Europe, low labour costs, relatively good infrastructure and stable business climate attracted various investments. In recent years, the CEE region has switched to an "assembly line" for Western European companies, with the intention to avoid remaining in the lower value chain of production.

The region could be well positioned in the after-crisis review of global value chains and their potential relocation.

However, competing with lower labour costs compared to Western Europe is not sufficient. The CEE region has already made progress in enhancing its productivity by a wider usage of automation and "robotization". Nevertheless this process is only beginning and further investments are needed to be in a favourable spot.

Further automation and digitalization are key issues to remain competitive amid increased productivity. CEE countries could not only benefit from the pillar of manufacturing - i.e. the automotive industry - once they pass through the coronavirus shock and cyclical weaknesses, but they would also be able to attract the relocation of other industries. These could include electric and electronics equipment production, but relocation would not be limited to them only. There is also potential in machinery, chemicals, as well as transports and storage. The region could rapidly adapt to demand, when supply chains of specific industries would be willing to increase their share or enter the region. Many years ago, the core CEE countries attracted investments in low value added sectors. A similar opportunity could arise for the Western Balkans this time around. Those countries have already attracted investments in automotive, electrical equipment, machinery, chemicals and metals, and they are well positioned to gather further relocations across the manufacturing industries. Moreover, there is a significant opportunity to outsource services to CEE thanks to digitalization and a large ICT talent pool. The recent pandemic confirmed that many jobs could be done from home, which means that they can be located elsewhere than the original domestic location of the workplace. If CEE countries further invest in digitalization, the inflow of services could be boosted, particularly in the Baltics and the most developed CEE countries, including the Czech Republic (Czechia), Hungary, Poland, Slovakia, and Slovenia. 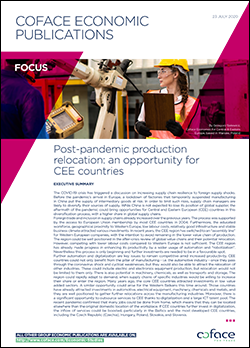 
Global Transport: What does the future hold beyond COVID-19?