Risky trade dependence for sectors and countries that export commodities

Almost twenty years after the launch of the first Forum on China-Africa Cooperation, China-Africa relations remain unbalanced. Bilateral trade has leaped over the past ten years (a total of $123 billion in 2016), driven, up to 2014, by exports, which have fallen by 51% since the peak. The region now has a trade deficit with China. While exports remain mainly concentrated on natural resources (90% of exports to China), imports are more diversified and include manufactured goods, transport equipment, and machinery (51% of the total) before minerals and precious metals. This trade imbalance also reinforces the risk of "Dutch disease" which, in economics, links the decline of the local manufacturing sector to the economic development of raw materials.

The slowdown in the Chinese economy and the reorientation of its growth model towards private consumption are reflected in a weakening of demand for commodities from Africa. This will have inevitable consequences for exporters. According to Coface economists' calculations, sub-Saharan Africa had a significantly higher export dependency ratio (on a 0-to-1 scale) than other emerging countries in 2016, at 0.24 compared to 0.16 for South-East Asia (one of China's largest trading partners) and 0.19 for Russia, Brazil, and India. The differential is even greater with the European Union (0.07) and the United States (0.12).

Unsurprisingly, the countries that have benefited the most from China's expansion and those with a less diversified economy are likely to feel the effects of lower demand more acutely. The strongest trade dependency is concentrated around crude oil exports and, according to the index established by Coface, South Sudan has been at the top of the ranking since its independence was declared in 2011, followed by Angola and Congo. The Gambia, which produces wood, is not far behind. Eritrea, Guinea, and Mauritania are also among the most dependent countries because of their exports of metal ores (iron, copper, aluminium). 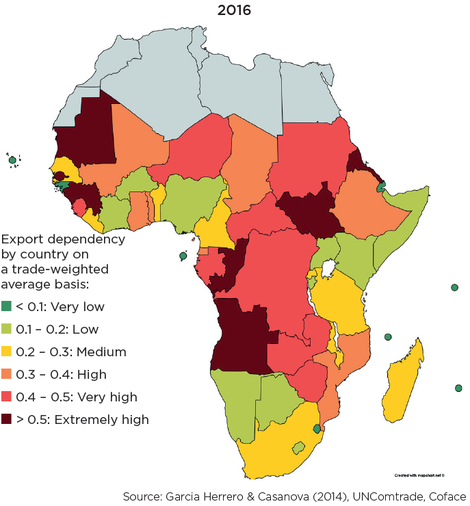 Diversification, the watchword for a sustainable win-win relationship

Despite this strong dependence on exports to China, the China-Africa relationship could turn into a win-win cooperation. Africa's export basket is gradually diversifying, incorporating higher value-added processed raw materials, raw wood, and, to a lesser extent, some agricultural products (tobacco, citrus fruit, seeds, and oleaginous fruit), matching the needs of China's emerging middle class. Even if such a change maintains the vulnerability of commodity-rich countries to international price developments, this could increase local incomes and foster employment and technology transfers.

Diversification also includes FDI flows and loans from China. Chinese investments in Africa are no longer extractive in nature and now extend to services, processing industries, transportation, and utilities. Existing initiatives, such as theOne Belt, One Road, will ultimately boost regional connectivity and reduce export costs.

However, since FDI and financing flows are much lower than trade flows, African countries that are heavily dependent on China remain highly vulnerable to weakening demand or a further decline in the prices of raw materials. Moreover, the risk for African governments would be to increase their vulnerability to changes in China's foreign policy and to those of its demand because Chinese interests in the region are, first and foremost, based on a complex network of political and economic objectives.

"The latest developments seem to be moving in the right direction but efforts are still needed to move from a marriage of unbalanced convenience to a partnership based on win-win cooperation", said Ruben Nizard, Coface's economist in charge of sub-Saharan Africa and co-author of the study,"China-Africa: will the marriage of convenience last?". 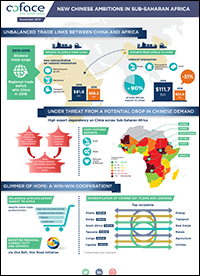 
Publication: China-Africa: Will the marriage of convenience last?