The COVID-19 pandemic's negative impact on global GDP growth and global trade volumes has caused a sharp drop in oil prices in the spring of 2020. This price drop, even if temporary, has affected Middle Eastern and African oil exporters differently, in line with their national output’s dependence on oil, as well as their fiscal strength and international reserves. Although Coface expects oil prices to average USD 60 per barrel in 2021, their volatility will remain a challenge for producing countries. In addition, the fiscal situation of these countries has deteriorated durably. Under these circumstances, the economic diversification - especially towards renewable energy sources - has become even more important. 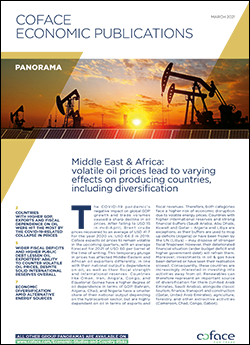 Download this press release : Diversification is one of the many effects of oil price volatility on ... (221.52 kB)