The Coface Political Risk Index takes into consideration various risk aspects: 1) political and social fragility issues, 2) conflicts and 3) terrorism. Terrorism is not a major concern, but deep political and social fragilities indicate a high level of frustration due to negativity surrounding corruption issues and a relatively high rate of homicide. Corruption became particularly acute when Operation Car Wash was revealed early 2014 for the first time in Brazil and then spread to 11 countries. The macroeconomic variables included in the index (such as GDP per capita, unemployment rate, inflation and income inequality) are usually weak points for Latin America.

In terms of conflicts, Mexico has the poorest performance across the region, mainly due to the increasing violence of gang wars. In 2017, its homicide rate surpassed that of 2011 - the peak year of the country’s drug war. In contrast, Colombia has registered a significant improvement. Violence related to guerrilla groups has considerably declined, thanks to an agreement signed between the Colombian government and the Armed Forced of Colombia (FARC). Nevertheless, despite these clear improvements, there are still some dissident groups operating in the country.

The erosion of general trust shown in traditional political institutions is creating opportunities for outsider contenders. A number of candidates are promoting themselves under the flag of anti-corruption. Mexico and Brazil are therefore facing a complicated political landscape.

Mexico’s left-wing candidate, Andrés Manuel López Obrador, is leading the polls by a wide margin. He has historically positioned himself against private investments and industries that are traditionally run by the state. Nevertheless, the breadth of ideological divergence among his political allies could hamper his ability to build a strong coalition and gain congressional support.
Although Brazil’s population shows a widespread level of dissatisfaction with traditional politics, paradoxically the current favourite remains former president Lula - who was convicted of money laundering and passive corruption in July 2017. He will probably not be able to run under local electoral law. Amid this judicial battle there is a controversial candidate - Jair Bolsonaro, a former military officer. In a simulation where Lula is not able to run, Jair Bolsonaro would be the next most popular candidate. If, however, former president Lula does not run, he appears to be the front runner in all simulations.

Regional growth may be hampered by political uncertainties

Political risks’ rebound has already had some impact on regional growth. One example of this has been the spill-over effect from Operation Car Wash, which has clearly been a contributing factor to Brazil’s worst recession.

The region’s GDP is expected to gain further impetus in 2018, with a growth forecast of +2.4% YOY - following a rebound in 2017 (1.1% YOY), two years of recession prior to that and a recovery from the slump in commodity prices observed since 2014.

This forecast would be revised downwards if current political uncertainties, especially in Brazil and Mexico, lead to a decline in equity markets and an increase in bond rates, combined with lower levels of corporate and household confidence (prompting delays or cancellations in investment or spending decisions). In the event of a long-lasting government vacuum, any freeze in public spending would have a negative impact on activity. 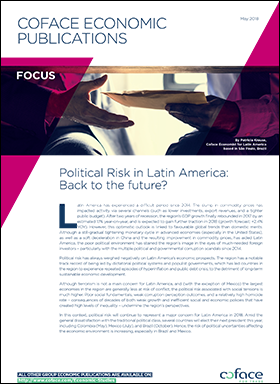 
Publication: Political Risk in Latin America: Back to the future?