According to the study conducted by Coface in 2021 on the payment behaviour of companies in Morocco, contractual payment terms in the country remain long, reaching an average of 79 days. However, they have improved significantly, with a shorter duration of about 14 days compared to the previous survey conducted in 2019.

According to the survey, late payments remain widespread in Morocco, with almost half of companies reporting payment delays of more than three months in the last six months. While GDP has contracted in 2020 (estimated -6.3% after a 2.5% growth in 2019), more companies have perceived a deterioration. In 2021, while Coface forecasts a 4.5% growth for the Moroccan economy, nearly half of companies seem to expect payment delays to remain stable, and more than a third expect them to increase.

Inter-company credit in Morocco has improved significantly over 2019:

Cautious stance towards the future, but some signs of improvement after the crisis 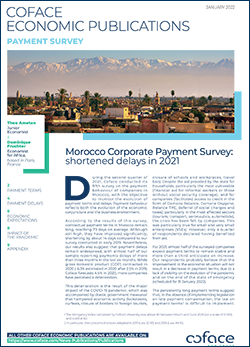