Outlook 2022: peering through the jungle of economic news

By Christiane von Berg, Coface economist for Northern Europe, based in Mainz, Germany

Wasn't autumn 2020 a nice time? Sure, a severe lockdown in Germany loomed on the horizon, but there was promising news regarding more effective vaccines. We economists breathed a sigh of relief, thinking we’d have a much clearer view of the economic future in autumn 2021. That was definitely a fallacy. To quote Goethe's Faust:
"And here, poor fool! with all my lore / I stand, no wiser than before."

Currently, with breaking news arriving every day, the economic outlook remains uncertain. As a result, some forecasts become outdated quicker than you can say "gross domestic product analysis". It’s therefore quite likely that the "bold" forecasts in this article will not remain accurate for long - but, at least, the following overview should bring a little more clarity to the jungle of economic news.

Germany's 2021 Winter Economy: Where are we now and where are we going?

In economic terms, 2021 was a mixed year for Germany, starting off on the wrong foot: we had a severe lockdown until April with small interruptions, and then reluctant opening steps until June. It was only from July 2021 on that normal life returned. However, by then, the strong pick-up in manufacturing from the last quarters was slowed down again by a severe shortage of input goods and high transport costs. We therefore started the year with a 2% contraction to GDP in the first quarter (Q1) of 2021, followed by two quarters of moderately positive growth.

Nevertheless, this was not enough to lift the economy back to pre-crisis levels: In Q3 2021, we were still 1.1% below the level of winter 2019/20, with only moderate growth on the cards for the coming quarters as well, assuming that a  lockdown for non-vaccinated people does not turn into a complete lockdown again. Germany’s economy is not expected to pick up noticeably more strongly again until the second half of 2022, assuming the shortage of input goods slowly dissipates, and the manufacturing sector is no longer slowed down.

The global shortage of input goods did not come out of the blue, and was, in retrospect (like so many things), not a surprise. Globally, the Covid-19 pandemic has brought about the biggest recession since World War II. Thus, in contrast to the 2009 financial market crisis, all countries in the world have been affected by the current recession, and have therefore all been (more or less) in a recovery phase since 2021. This means that global demand is at a historic high - but the supply of input goods cannot be expanded so easily and so quickly.

In addition, supply itself is tightening due to ongoing coronavirus restrictions, with vaccination progress varying wildly between economies. Added to this are extreme weather phenomena: floods, droughts, forest fires, etc. And as if that were not enough, there are the problems concerning transport and China (See "Supply chain and inflation headwinds hamper the global recovery" for more info). 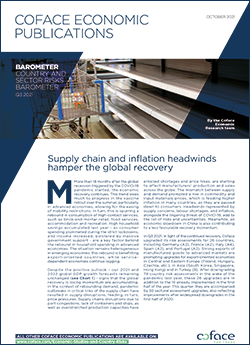 China has implemented a "zero-Covid" policy - potentially, in part, not to jeopardise the Beijing Winter Olympics in February 2022. As soon as even a few Covid-19 cases turn up, the Chinese government imposes a lockdown on entire cities with millions of inhabitants, including their ports.

This creates container ship congestion, which then continues globally from port to port. And when the crew, although vaccinated, are forbidden from disembarking because their vaccine is not accepted in a given region (e.g. Chinese vaccines in the European Union), this makes it difficult to unload cargo.

Finally, China has put a spanner in the works by rationing energy. On the one hand, this is for environmental reasons (the sky over Beijing is supposed to be blue for the Olympics). On the other, this is because of coal production lockdowns. This puts a strain on industrial production in China, and subsequently on all consumer industries and countries. This shortage of input goods will continue until global demand calms down, and supply is both stabilised and expanded - therefore leading to an ease in price pressure.

Exactly these two aspects (shortage of goods and price pressure) can be seen in the German economy. On the labour market side, things are going relatively well for the Federal Republic: the unemployment rate returned to pre-crisis levels in October 2021. Furlough only occurs sporadically, but is a persistent problem in the automotive sector, where shortages of computer chips bring assembly lines to a standstill for weeks at a time.

In addition, the severe shortage of skilled workers determines the employment market, and could therefore soon lead to higher wage demands - especially given the current inflation rate. To compensate for this alone, wages would have to rise by more than 5% compared to the previous year. Several factors are contributing to inflation, notably temporary effects such as the VAT cut from 2020 and the carbon dioxide tax hike in January 2021, but also due to producers and retailers passing on their high production costs to customers. Since the latter phenomenon does not fade as quickly, the inflation rate should actually be higher than the annual average in 2022 (3.3% in 2022 after 3.1% in 2021).

The European Central Bank is very concerned about inflation rates: if consumer prices stay higher for longer, wage settlements could be particularly high, thus starting a permanent upward price spiral. The ECB would then be forced to implement a less expansionary monetary policy by reducing bond purchases. However, it will likely take a long time to find a majority for this decision. It is more likely that the ECB will suppress inflation for as long as possible in order to strengthen the public finances of many eurozone countries with its policies. Thus, the low deposit rate will likely remain unchanged in 2022.

In 2021, the "paradox" of low insolvency figures continued. Although individual sectors are supported by the state, businesses have so far reported no payment problems, and corporate payment surveys show declining insolvency rates. This phenomenon will likely continue until the government ends its market intervention. Until then, however, we are not out of the woods: although the number of insolvencies is falling, insolvency losses are rising. Measured in terms of outstanding liabilities from insolvencies (published by the Federal Statistical Office), Germany has reached a level of 45.5 billion euros in September 2021 (latest available data). This is already more than the total liabilities for the whole year of 2020, and means that 2021 will be the "most expensive" year since 2009, because although there are few insolvencies in Germany, they are very large.  For now, there is no end in sight for this trend in 2022.

This article first appeared in issue 4/2021 of Der CreditManager and has been updated and translated into English.


Examining the euro, 20 years on