Political risks in Asia are on the rise

According to Coface’s Political Risk Index, Asia scored 45% on the latest risk ranking, above the world average of 35%. Nevertheless, this score remains lower than those of Sub Saharan Africa, the Middle East & North Africa, Central Europe and Latin America.

Within the region, South Asia has the highest score for political risks, followed by Southeast Asia. East Asia has reported the fastest acceleration in political risks over the last decade - particularly in China, where the overall level rose by 7.2 percentage points between 2007 and 2017. This was mainly due to a particularly high score for the country’s social fragility index. Social pressures linked to income inequality and corruption are the highest in South and Southeast Asia, despite their buoyant economic activity.

Coface’s risk model also includes a “penalty” score for countries with a high volume of conflicts and terrorist attacks. Again, South and Southeast Asia feature a high level of security risks due to ethnic, religious and linguistic fractionalisation, resulting in tensions between the different groups. Examples of these countries include India, Pakistan, Myanmar and the Philippines.

Going forward, these risks could cloud the outlook for some Asian economies. It would appear that much of the development in political risks in the region over recent years has been linked to rising political fragilities, aggravated by a proliferation of less democratic styles of governance. 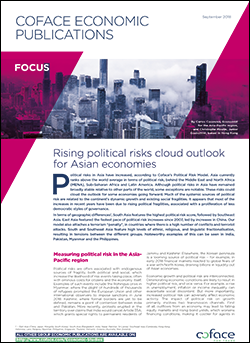 Download this press release : Political risks in Asia are on the rise (141.94 kB)