Tighter global liquidity and Asia: not all gloom and doom

Asia has been under pressure following tighter global liquidity in 2018. Coface’s index for measuring relative vulnerability to outflows points to increasing divergence in Asia. A few markets will benefit from strong fundamentals, proactive monetary policies and ample buffers to resist outflows but others will be under pressure. Above all, the relative sustainability of the real external position is the most significant factor. Lastly, countries that do not possess flexible exchange rate regimes may struggle to smooth out currency fluctuations.

As central banks globally resume monetary policy normalisation, there come the risks of liquidity outflows. To limit its associated risks, central banks in the region have been forced to follow the tightening stance of monetary policy set by the US, despite being in very different stages of their respective business cycles. Asian emerging markets have also experienced depreciatory pressure during most of 2018. As a result Philippines, Indonesia and India intervened on currency markets to smooth out exchange rate fluctuations. Indonesia and Pakistan took measures to limit imports in order to counter the pressures induced by widening trade deficits resulting from weaker currencies. All of this has brought back memories of past instances when the region struggled with portfolio outflows, namely the Asian Financial crisis of 1997 and the “Taper Tantrum” of 2013.

The region is in a better position to resist outflows as a result of many factors including floating exchange rates, current account surpluses, an increase in Foreign Direct Investment (FDI) inflows and expatriate remittances. FX reserves have also increased and remain at adequate levels in most cases. However, the relative sustainability of the real external position remains a concern in some cases. FX reserves can be used to finance this external position, but this is not a sustainable solution and Coface expects that some Asian emerging markets will struggle going forward as a result of such imbalances.

Coface’s index for measuring relative vulnerability to outflows points to a divergence in the exposure to external pressures amongst Asian emerging markets. The level of exposure varies depending on existing vulnerabilities, as well as the degree to which buffers are able to fend off those risks. It is likely that investors may have gotten ahead of themselves in some cases. Current valuations may not be justified in the context of strong fundamentals, proactive monetary policies and the fact that some of these markets have plenty of ammunition, especially on the FX reserves front, to resist outflows in the foreseeable future.

That being said, some Asian emerging markets will feel the squeeze more than others, as the region remains subject to some pressures. Markets have been grappling with risk-on modes once again, a consequence of escalating trade war threats between the US and China. This explains outflows from countries that have otherwise been doing well. Moreover, higher oil prices in 2018 contributed to slower growth, a scenario that can’t be discounted in 2019. Coface expects that Brent prices will remain close to USD 75 per barrel on average in 2019. Capital outflow dynamics will also remain conditioned by the pace of monetary policy tightening in the US. Our baseline scenario implies a slowdown in the pace of Fed hikes (two hikes in 2019 compared to four in 2018), as inflation has already slowed below the Fed’s 2% target. 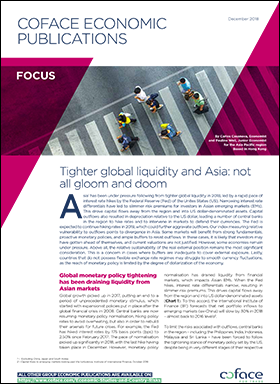 Download this press release : Tighter global liquidity and Asia: not all gloom and doom (262.61 kB)