In 2017, the Baltic States benefited from a rebound in external demand. All countries recorded a high growth rate of exports, increasing by 17% in Lithuania, 10% in Latvia and 9% in Estonia. This was due to improving demand from Russia last year, which remains an important trading destination for the Baltics, as well as other routes in line with the recovery in global trade. However, the ongoing increase in household consumption and a revival of investments made domestic demand the main driving force of these economies.

The results of the largest companies in the region underline this positive economic development. Overall turnover increased by 9.8% with Lithuanian companies profiting the most (+11.8%), followed by Latvian (+6.8%) and Estonian (+6.0%). The top 50s earned over EUR 38.5 billion in 2017. Net profits likewise developed well, posting a rise of 25.3% for all top 50 companies. Whereas Latvia’s largest companies more than doubled profits to EUR 457 million, Estonia’s faced a reduction of -17.2% to EUR 332 million. Overall employement only rose slightly by 2.0%. It is once again Estonian companies that pushed their way to the top. Compared to last year’s ranking, Estonia added another four companies to the largest 50, leaving the country with a total of 15 represented. In total, eleven Baltic newcomers joined the ranking in 2017.

Lithuania remains the country with the highest number of top companies in the Baltics (28) and also the one with the highest average Coface Credit Assessment (7.5). This score indicates the probability of default for a single company indicating a very low risk of doing business with the largest companies in the Baltics (average score of 6.7). Estonian players show a medium to low risk with an average score of 5.5, whereas risk remains low in Latvia (6.4). 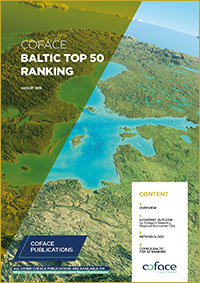