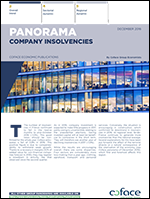 Download this publication : Company insolvencies in France: a further fall in 2017 (628.50 kB)