After US households in 2007-2008 and Eurozone states in 2011-2012, emerging countries are now getting their turn at the epicentre of the storm, in part because of excessive debt. How did that happen? Growth cut in half in the emerging world between 2010 and 2015, highly expansionary monetary policies after the Lehman Brothers crisis, and the drop in commodity prices since mid-2014 are all part of the answer.

In this environment of increased risks for companies, Coface is downgrading a number of ratings of emerging countries or revising their outlook to negative, in Latin America (Brazil for the 2nd time in less than a year), Africa (South Africa, By Coface Group Economists Algeria, Zambia, Tanzania, Gabon, Namibia, Madagascar), the Middle East (Bahrain), and Asia (Kazakhstan).

A small consolation prize: many economies are more resilient today (increased flexibility of exchange rate regimes, abundant exchange reserves, better capitalisation of banks, low public debt compared to that of advanced economies, etc.) than during the 1990s, which was marked by numerous emerging crises. Furthermore, regions are not affected by this double shock on growth and corporate debt in the same way: for example, there is still little effect on Central Europe at this stage, which has also led Coface to reclassify Hungary’s country rating (from B to A4) and revise Latvia’s outlook to positive.

On the bright side, the eurozone is continuing to recover gradually, as reflected in the revision of the outlook of Italy’s rating to positive. However, cheap oil, the weak euro, and the slow decline in unemployment should not detract from the many sources of possible risk this year, with political risk foremost among them (Spain, Greece, Portugal, etc.). Apart from those whose activity depends very much on the energy sector (Canada downgraded to A2) and/or Chinese growth (negative outlooks for the ratings of Japan, Taiwan, and Hong Kong), the advanced economies overall should continue to benefit from moderate growth in 2016. Unfortunately, this good news will not be enough to restart global growth this year! 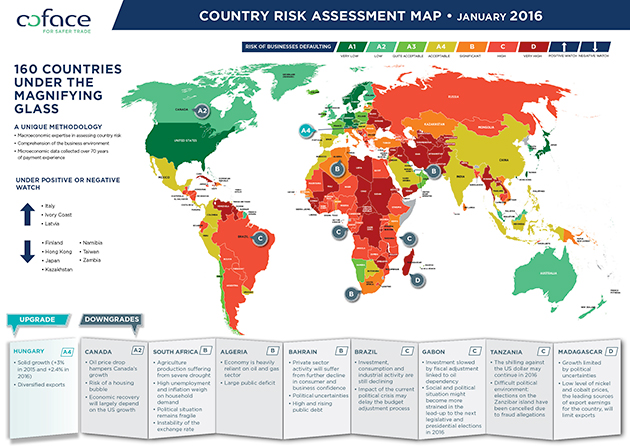