For once, the summer proved to be particularly quiet. No major events disrupted the path taken by the world economy. While the summers of 2015 and 2016 were marked by the stock market crash in China and then by Brexit, the summer of 2017 was, instead, characterised by historically low volatility on financial markets at the end of July, while numerous stock market indices like the S&P 500 and the MSCI Emerging Markets reached record highs.

Is this situation a source of concern? Does it seem like a potential excess of confidence, and can we fear a possible bursting of a bubble? Could corporate profitability suffer from financial markets turmoil?

On the economic front in appearance, activity is bouncing back, leading us to upgrade 14 sectors (only 2 downgrades). Europe is still on an upward trajectory (upgrade of Hungary, Finland, and Cyprus’ assessments), and capital flows are coming back in large emerging economies, even though they will remain vulnerable to the Fed monetary policy and to political risk. There are more and more signs of recovery in Brazil as well as in Russia. However, Chinese resilience is still masking major vulnerabilities, including a high credit risk, while India has also surprised, with disappointing growth for once in the second quarter. At last, good news in Africa: despite modest growth performances, a busy electoral calendar this summer turned out to be relatively peaceful.

But ultimately, more surreptitiously, the situation is changing on the developed economy scene. While the strong recovery in the eurozone has taken hold, there are more signs of weakness in Anglosphere countries, as illustrated, for example, by the low savings rate both in the United States and in the United Kingdom, characterised by high household debt. This does not suggest good news on the private consumption front, as certain signs of slowdown are already visible in these two economies. The view of their respective future is clouded by major political uncertainty: Brexit negotiations seem to be moving at a glacial pace, while Donald Trump is disappointing investors, who are having every difficulty deciphering the direction of future policies, particularly with regard to its tax plan. Conversely, the political horizon has become considerably clearer in Europe. This situation could naturally lead to the continued appreciation of the euro against the dollar. 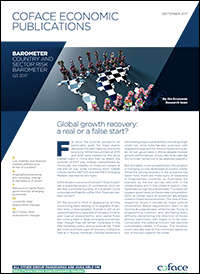