On June 5, 2017 Saudi Arabia, the United Arab Emirates, Egypt and Bahrain (known as the quartet) announced they were breaking diplomatic ties with Qatar, due to the country's relations with Iran and accusations that it supports extremism. The quartet has suspended all air and sea travel links with Qatar, while Saudi Arabia has closed its borders with the country. This means that overland imports of food and other suppliers to Qatar are blocked. Sanctions have had diverse impacts, particularly on trade, capital and human flows. Nevertheless, Qatar, the world’s largest exporter of liquefied natural gas, has been able to soften the effect of the crisis so far, thanks to its reserves of cash and gold. The government has taken immediate and effective measures which, along with rising energy exports, have been able to mitigate the challenges arising from the crisis. Against this backdrop Coface expects the Qatari economy to grow by 3.4% in 2017 and by 3% in 2018 - although this is far below the real annualised growth of 13% recorded between 2005 and 2014. 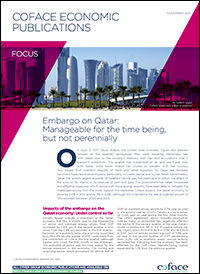 Download this publication : Embargo on Qatar: Manageable for the time being, but not perennially (644.95 kB)