The escalation of the conflict in Ukraine and the invasion of the latter by the Russian military on 24 February has triggered turmoil in the financial markets, and drastically increased uncertainty about the recovery of the global economy two years after the onset of the COVID-19 pandemic. With Russia being the world’s third-largest oil producer, the second-largest natural gas producer and among the top five global producers of steel, nickel and aluminium, any significant reduction in energy supplies and metal shipments is highly likely to lead to soaring global prices for these commodities. For this reason, on the day the invasion began, financial markets around the world fell sharply, and the prices of oil, natural gas, metals and food commodities (especially grains) surged. While high commodity prices were one of the risks we had already identified as potentially disruptive to the recovery, the escalation of the conflict between Russia and Ukraine increases the likelihood that commodity prices will remain higher for much longer. In turn, it intensifies the threat of long-lasting high inflation, not only for basic needs, thereby increasing the risk of social unrest in both advanced and emerging economies. Industries such as automotive, transport, chemicals, and more generally all sectors using the abovementioned raw materials as inputs appear as particularly vulnerable.

Furthermore, considering the scale of the sanctions announced by the Western countries and their allies, the Russian economy will be in great difficulty and will again fall into (deep) recession in 2022, leading us to downgrade the country's risk assessment from B to D. Because of its dependence on Russian oil and, above all, natural gas, Europe appears to be the region most exposed to the consequences of this conflict. While replacing all Russian natural gas supply to Europe (~40 % of total European consumption) is virtually impossible in the short to medium run, current price levels, if maintained until the end of the year, will already have a significant effect on inflation. We estimate at least 1.5 percentage point of additional inflation in 2022 compared to our previous forecast in the Eurozone, which will, in turn, erode household consumption and lower GDP growth. While some countries, such as Germany and Italy, are more dependent on Russian natural gas, the trade interdependence of eurozone countries suggests a general slowdown (1 percentage point after taking into account impacts on external trade and business investment). A complete cut of Russian natural gas supply would raise the cost to 4 percentage points at least - bringing annual GDP growth to zero in 2022.

In the rest of the world, while the economic consequences will be felt mainly through the rise in commodity prices, which will fuel already existing inflationary pressures in most parts of the globe before the conflict, the drop in demand from Europe will hamper global trade. As always when commodity prices soar, net importers of energy and food products will be particularly affected, and even more so in an uncertain and volatile prices environment, with the spectre of major supply disruptions in the event of an even greater escalation of the conflict, and the further sanctions and retaliations that each country might take. In short, the world has shifted, so have the risks. 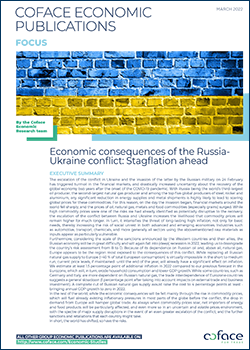