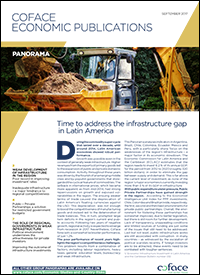 Download this publication : Time to address the infrastructure gap in Latin America (548.25 kB)