The first part of 2019 was marked by the decline in world trade, which will decrease in volume over the year as a whole according to our forecasts (-0.7%), despite a slight recovery expected in the second half of 2019 (Graph 2, p. 4). At the same time, however, global economic growth is expected to slow by “only” half a percentage point this year (from 3.1% in 2018 to 2.7% in 2019) before remaining stable in 2020. And while corporate insolvencies will increase in two-thirds of countries this year (Graph 1), in most cases the starting point was low. How can this apparent dichotomy between growth and trade be explained?

While the former is still supported by the resilience of service activities (less traded internationally), the latter continues to be driven down by the negative dynamics of the manufacturing sectors that we have already mentioned in recent quarters.

The automotive sector alone summarizes the current vulnerabilities of the global economy. Indeed, it is penalised by the negative eff ects of 1) the cyclical slowdown observed in many regions, 2) political risks (in this case trade protectionism) and 3) structural changes linked to innovations and/or changes in consumption behaviour (high level of equipment for Chinese households and the implementation of new, more stringent anti-pollution regulations accelerating the transformation of regional production chains in Europe). Coface is therefore downgrading its automotive sector risk assessment in 13 countries (for the second time in six months for many of them). This sector alone accounts for almost half of this quarter’s sector assessment downgrades.

Other sectors affected by negative changes  include distribution and textile-clothing in South Africa, which have been penalised by the sluggishness of household consumption. Risks are also on the rise for energy in the United States and Canada, in a context of high inventories combined with a reduction in the  number of operating wells in recent months.

Regarding country assessments, given the rising risks in the automotive sector, Coface is downgrading the country assessments of Germany (from A1 to A2), which is vulnerable to the decline in world trade, as well as three economies that are dependent on it: Czechia and Slovakia (both from A2 to A3), as well as Austria (from A1 to A2). The business risk also increases in Iceland (downgraded to A3). On a more positive note, companies in Uzbekistan (from C to B) and Kyrgyzstan (from D to C) are benefiting from continued relative political and economic liberalisation. And on the sectoral side, four sectors have improved,  including the Canadian metal sector, which is benefitting from the elimination of US tariffs on steel and aluminium imports. 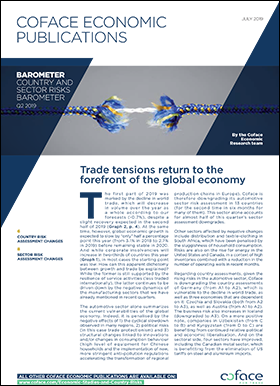 Download this publication : Trade tensions return to the forefront of the global economy - Country... (3.46 MB)