More than two months after the beginning of Russia’s invasion of Ukraine on 24 February, and despite several rounds of negotiations, prospects for a rapid resolution of the war seem increasingly unlikely. As the conflict has intensified, Western sanctions against Russia have continued to pile up, with no less than five waves of sanctions – six very soon - imposed by the European Union since the beginning of the war. In this context, a rapid lifting of economic sanctions and a return to the pre-war situation seems completely illusory, even if a peace agreement is signed between Russia and Ukraine. In terms of economic consequences, we have revised upwards our initial estimate (published in early March) of the short-term cost to the global economy - to approximately one percentage point in 2022.

In a strongly and persistently adverse environment, the war in Ukraine will have few winners and many losers. The importance of the belligerents - mainly Russia, but also Ukraine and Belarus - in the production of many commodities and the fears of supply disruptions have led to a surge in prices, which, despite the recent fall back for some of them, remain at very high levels. Inflationary pressures, already prevalent in most regions, are thus exacerbated, leading to a decline in household disposable income and, ultimately, in consumption, as the current anxiety-inducing environment and very high uncertainty will, in all likelihood, encourage precautionary savings. Volatility and uncertainty will also weigh heavily on the investment decisions of companies whose financial situation, despite record-high cash buffers, is also likely to deteriorate significantly as production costs keep increasing or remain high. Beyond Central and Eastern European economies, which have significant economic linkage and trade flows with Russia, Western European countries are the most exposed due to their high dependence on Russian fossil fuels. While the shockwave will be felt differently and at varying times in different parts of the world, no region will be spared from imported inflation, supply chain disruptions, and the resulting global trade sluggishness. We therefore estimate that the war will also have a significant negative impact in the U.S., where the Fed will be forced to conduct more interest rate hikes than initially expected, with massive consequences for the rest of the world. As with any significant monetary tightening by the Fed, most emerging markets will indeed have to follow suit in order to avoid capital outflows and currency depreciation - especially those with large current account deficits and/or high short-term external debt. On top of that - and as already mentioned in our July 2021 Barometer - political risk had significantly increased with the pandemic: this issue will remain more topical than ever, as supply difficulties and soaring food prices are likely to fuel social tensions.

It is worth mentioning that the balance of risks is clearly tilted downwards, as headwinds are accumulating, most notably the resurgence of COVID-19 cases in China, which will fuel both global inflationary pressures and supply chain disruptions. In such a context, the choices that monetary authorities are currently facing are probably as difficult as crucial, in an environment combining decades-high inflation, need for fiscal leeway, and very high levels of public and private debt.

As the economic consequences of the war in Ukraine will mainly materialize from the second half of 2022 onwards, they will obviously affect 2022 GDP growth figures, but even more so those for 2023 and beyond – longer term prospects that our next Barometer will cover. In other words, scars are likely to be deep and, beyond human casualties, the economic consequences will be felt for years after this new war on European soil has ended. While it is still too early to predict how the global economy will redesign itself after the successive shocks the early 2020’s are all about, the perception we have since the beginning of the pandemic still applies: the world has shifted, and nothing will ever be the same. 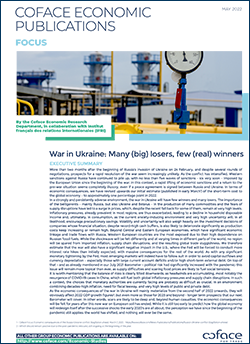