Currency Risk in Africa: Easing in 2018, but reserves have melted

The exchange rate risk is still relevant on the African continent, as evidenced by the depreciation of the Angolan kwanza by more than 30% since the partial liberalisation of the exchange rate regime in January 2018. The shock of falling commodity prices, particularly oil prices from summer 2014 onwards, destabilised many African countries. In the wake of the poor performance of its main economies (Nigeria, South Africa, Angola), the region’s growth slowed to its lowest level for 20 years in 2016. In addition to the slowdown in activity, commodity price developments have resulted in deteriorating terms of trade and downward pressure on most African currencies.

The exchange rates of exporters of oil (led by Nigeria and Angola) and of mineral resources (Mozambique, Zambia) have been under intense pressure, which in many cases has led to significant depreciation's, despite the use of foreign exchange reserves to mitigate their magnitude. Since 2013, the majority of African currencies have lost more than 20% of their value. For companies, these depreciation's resulted in accelerating price increases for imported products, and an increase in their foreign currency-denominated debt burden. For those exporting and/or importing from these countries, currency instability has also meant higher costs for cross border transactions. In some cases (Nigeria, Angola, Democratic Republic of the Congo), liquidity shortages have made it more difficult to repatriate profits, as well as to trade within borders. Capital controls (Egypt) and/ or import controls (Algeria), implemented to curb pressures on the foreign exchange market, have also had direct consequences on business operations. 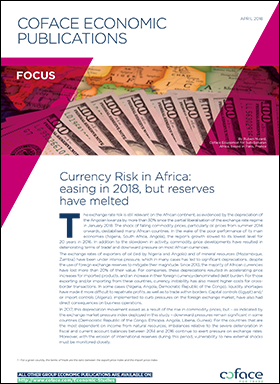 Download this publication : Currency Risk in Africa: Easing in 2018, but reserves have melted (2.07 MB)