Poland has seen a slowing of its economy this year, compared to 2015. Nevertheless, growth is still continuing at a fair rate and, in fact, remains at a level which many other economies can only dream of. The subdued economic activity, confirmed in recent data, could bring some challenges for Polish companies. However, thus far, businesses have been benefiting from positive macroeconomic conditions and have enjoyed another year of lower business insolvencies.

Bankruptcies have been decreasing since 2014. The first half of 2016 saw 328 proceedings - a fall of 14.1% compared to the year before. In addition, new legislation means that companies now have alternatives to bankruptcy proceedings. The new legislation, implemented this year, is separated into acts of Bankruptcy Law and Restructuration Law. The latter provides various forms for restructuring businesses that are suffering from liquidity problems, with the aim of returning them back to effective operations. The new restructuring procedures are likely to become even more frequently used than has already been seen in the second quarter of this year. This makes the latest statistics difficult to compare with previous figures. Our base line scenario assumes that proceedings will drop by 8.9% at the end of 2016 - although this forecast could be affected by an increasing number of restructuration procedures. In 2017, proceedings are expected to decrease by 4.8%.

Poland’s solid economic growth is being driven by household consumption. Although the country is facing a slowdown in EU funds (which have been used intensively for investments and contributed to economic activity last year), the input from private consumption will intensify this year - especially with the continued improvements in the labour market. The unemployment rate has dropped to a level which has not been seen for 25 years. In addition, wages continue to record fair growth and inflation remains low. This environment indicates good prospects for the retail sector.

On the external side, Polish exporters are actively exploring foreign markets. Nevertheless, recent turbulence, such as the Brexit (the UK is Poland’s 2nd largest export market) and the indirect effects of the Chinese slowdown, could hamper the ambitions of Polish companies. Internally, businesses remain cautious on investments, constrained by uncertainties over external and domestic factors. Domestic issues include the possible introduction of further sectorial taxes – even though the government has not signaled its intention to do so. At the same time, the latest taxation burdens on financial institutions and retailers have not had particularly detrimental effects on Poland’s economy.

Poland’s economic growth structure, where the input of household consumption is crucial to expansion, favours the prospects for sectors driven by consumer demand. On the external side, exporters are continuing to reap the benefits of their price and quality competitiveness on foreign markets. Nevertheless, the findings of this publication show that household consumption has a stronger impact than exports - both on the macroeconomic side, as well as on the level of company insolvencies in Poland. 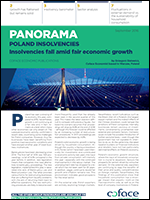