The second quarter of 2017 marked a new start for Europe, Russia and, on the sector side, for the automobile and agrofood industries in several countries.

In order to give companies a more complete picture of the risks worldwide, Coface is now publishing quarterly assessments of 13 sectors in 24 countries representing almost 85% of the world's GDP, as well as 160 country risk assessments.

Europe is accelerating, as evidenced by a wave of upgrades

Conflicting signals from the US economy (A2, low risk), along with the lack of clarity surrounding the fiscal stimulus package are signals for caution. Despite an improvement in GDP for Q1 (up from 0.7%, to 1.2%) and unemployment being at its lowest level in nearly sixteen years, household consumption is continuing to falter. Furthermore, credit growth is likely to slow, as a result of the expected rise in interest rates.

The recovering US energy sector has been upgraded to "high risk". Crude oil production and the on-shore oil services industry are growing and will continue to expand as a result of regulatory relaxation.

The Eurozone is in positive momentum, enjoying very favourable financing conditions, the support of investment for growth and a revival of corporate confidence. Insolvencies are down in almost all countries - except in the UK (which is being weakened by the slowdown in consumption) and in Belgium (the Eurozone’s fourth largest trading partner). In these two countries, insolvencies are expected to increase by +9% and +5%, respectively, in 2017 according to Coface's forecasts.

On this occasion, Coface is upgrading its assessments of Spain (where growth and foreign trade are particularly dynamic) to A2, and Portugal (which has withdrawn from the European Commission's excessive deficit procedure) to A3.

Several sectors are following this positive trend. Agrofood, at both regional level in Western Europe and in France, is now assessed as "medium risk". This is the result of rising raw material prices and the end of disastrous climatic conditions for crops. Metals in Germany are now classed as "medium risk", due to the stabilisation of prices and the positive dynamics of its core markets. The automobile sector in Italy is now rated as "low risk".

Central Europe is continuing to benefit from improved assessments. This quarter, pharmaceuticals are classed as "low risk", due to increases in internal and external demand. Energy has improved its classification to "medium risk", at both regional level and in Poland, boosted by the profitability of oil refining companies and the anticipated increase in demand. Metals are rated at "medium risk" at regional level and in Poland, thanks to new investments in infrastructure and the recovery of the automotive sector.

Varying performances in emerging countries, including Russia, China and India

A slight recovery is being experienced in Russia, where the country assessment has improved to B. Investments and industrial production are increasing and retail sales are no longer falling, due to the controlled level of inflation (close to 4%). Automobile sales are up (+11% in 2017), allowing the industry to be upgraded from "very high risk" to "high risk". Uzbekistan (now C) in particular is benefiting from the recovery of activity in Russia, as well as from financing from the World Bank and the EBRD, and the easing of political uncertainty.

The situation is mixed in emerging Asia. In China (which was downgraded to B in June 2016, signalling "significant risk"), the indicators have returned to red. The country’s economy is slowing and the risks of insolvency are rising, notably due to stricter credit conditions. The automobile sector in particular (at regional level, as well as in China) has been downgraded, to "high risk", due to drastic control measures on internal combustion cars. Despite a decline in automotive sales, the retail sector is benefiting from robust demand, hence its upgrade to "low risk". In India, the improved assessment of the agrofood sector to "medium risk" is explained by climatic conditions which have returned to normal.

Risks in the Middle East and Africa are increasing

The Middle East and Africa are the regions in which country assessments have deteriorated the most since 2014-15. This is due to increase political tensions and falling oil and gas prices. Coface has downgraded several countries this quarter. Qatar’s (now A4) economic growth and financial situation could worsen, following recent measures taken by other Gulf countries. Bahrain (now C) is facing a high budget deficit and excessive debt. Namibia’s (now B) outlook for this year is weak, despite a recovery in the mining sector. Mauritius (now A4) received lower rankings in the international benchmarks that measure business environments.

Risks are also escalating on the sectoral side, as evidenced by the pharmaceutical industry's downgrade to "medium risk" in the United Arab Emirates and Saudi Arabia, due to lower public spending. 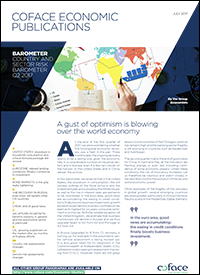 
Publication: A gust of optimism is blowing over the world economy