Labour shortages in the Central and Eastern Europe region: an opportunity for households but a threat for local companies

Developments in Central and Eastern Europe (CEE) labour markets have been beneficial for households. Rising wages and low inflation, combined with improving consumer confidence, have led to lower unemployment rates and an increase in private consumption. However, the upturn on the labor market is such that companies are increasingly facing difficulties in recruiting, especially qualified personnel. Manpower shortages and the consequential rise in labour costs are concerns for businesses.

Labour markets in the Central and Eastern Europe region are continuing to improve. Unemployment rates have fallen to the lowest levels ever recorded and most CEE economies are enjoying better unemployment figures than the EU average. These figures have shown a particularly sharp improvement over the last two years. Spiralling wages, low inflation and improving consumer sentiment, have made household consumption the main driver of economic expansion. Most CEE countries have been recording positive wage dynamics over recent years. Since 2010, gross wages have jumped by more than 30% in Romania and Bulgaria and by more than 20% in Hungary and Poland.

Nevertheless, while households and the region’s overall economic activity are benefiting from these developments, companies are suffering as they are faced with the strengthened wage bargaining power and are forced to accept higher compensation costs. Dynamic external and domestic demand, the low birth rate and emigration to Western Europe have all contributed to labour shortages. A rising number of companies are reporting this as a barrier to business expansion.

Even the companies that are paying higher wages are still being confronted with difficulties in hiring employees. Job vacancies are particularly acute in the Czech Republic and Hungary. Wage increases are currently exceeding labour productivity gains. Fortunately, however, regional labour costs are still, on average, more than three times lower than in CEE countries.

This advantageous gap that the region enjoys in terms of respective unit labour costs, along its geographical and cultural proximity, should continue to bring it competitive business advantages. Nevertheless, these benefits could be compromised in the medium-term if emigration of the youngest and most skilled workers continues.

Several solutions can be implemented

Companies will continue to be faced with labour shortages - particularly with regards to qualified employees. Recent surveys indicate that professions such as drivers and engineers are among the hardest vacancies to fill for employers in the CEE region.

Labour shortages could be alleviated by encouraging emigrants to return and by more immigration. This would require improvements in governance and addressing the reluctance in accepting migrants. A sufficient return of emigrants to their home countries is very unlikely. Those hurt by Brexit (or similar future scenarios) will be more motivated to find work in other Western European countries, due to the significant differences in income potential.

Encouraging labour participation among the ethnic minority, female (who’s participation rate remains low compared to Western Europe: 61ù in Poland, 59% in Hungary, 57% in Romania, compared to 79% in Sweden, 72% in Germany and 71% in Austria) and senior populations as well as boosting vocational training and tertiary education programmes would also help to address the situation. 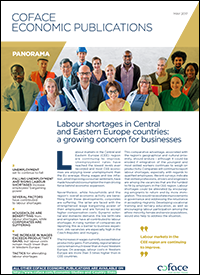 Download this press release : Labour shortages in the Central and Eastern Europe region: an opportun... (163.94 kB)