Following the political risk index specific for Western Europe (2016) and emerging countries (2013), Coface launches a global index for 159 countries. Combination of two major components - the security risks (conflict and terrorism) and the political and social risks -  allows a complete ranking of the political risk.

The score for theMiddle EastandNorth Africais high (Afghanistan, Iraq, Libya, Nigeria: 100%) and on the increase since 2010 (+22 points for the Lebanon, +20 points for Egypt). InSub-Saharan Africa, the risk has been growing since 2013 due to the conflicts that are discouraging investors: +36 points in Nigeria (-30% FDI since 2013), +28 points in Central African Republic (note that Côte d’Ivoire is showing slight improvement: -6 points).

The countries of theCommonwealth of Independent Statesare also significantly above the average. The deterioration in the scores of Russia (+2 points) and Ukraine (+41 points) is not the sole reason for this. A rise may also be noted in the political and social fragilities of Tajikistan (+10 points) and Azerbaijan (+8 points).

Latin America, where social fragility is rising, is on an upward slope (Mexico +25 points and Venezuela +9 points).

Trends are mixed inAsia, with the exception of the two giants, China (+10 points) and India (stable), the political risk has been gradually improving since 2010 (Sri Lanka: -60 points; Nepal: -25 points).

The conflict index is based on the occurrence of conflicts, their intensity, and the types of actors involved. The countries in a state of war are at the top of the ranking: Afghanistan, Iraq, Sudan, Nigeria and Syria. Mexico, because of the cartels war; Colombia; Algeria and India, also stand out with a high level of risk.

The security risk cannot be measured without taking account of the terrorism indicator which has increased 2.8-fold since 2008 and is likely to affect the confidence of businesses, households and foreign investors. Most of the countries of the OECD engaged in combating the so-called Islamic State have seen their score increase between 2011 and 2015: France is the number-one developed country in the rating with a score of 77% (+24 points). The risk have also been progressing in the USA (+23 points), Australia (+27 points) and Germany (+27 points).

The political and social fragility indices take account, on the one hand, of the nature of the political regime, ethnic and linguistic fragmentation, and political and civil liberties and, on the other, of the pressures and instruments of the social risk. Here again, the countries where the conflicts are intense manifest the highest risk levels. Between 2007 and 2015, the rise was particularly marked in the CIS and Latin America.

Developed countries put to the test of the populist wave

For the developed countries, the "Manifesto" project data has been added, taking into account the rising populism. It surveys the proportion of political manifestos allocated to an electoral theme (protectionism, security, public order, national values, etc). The analysis conducted by Coface demonstrates that the countries in which the pressure of populism has reached the highest level are the United Kingdom (score of 73%) and France (70%) with a relatively significant share of themes linked to public order, followed by Austria (64%) and the Netherlands (63%), where a significant share deals with distrust of multiculturalism. 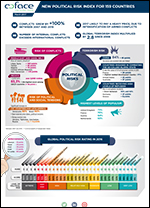