Are bond markets the new "spare tyre" for corporates in emerging economies?

If the year 2017 is synonymous with a slight economic upturn in the emerging markets, let's not forget the previous three years were marked by increased corporate risk. The reasons for this were numerous: declining commodity prices, high corporate indebtedness, production overcapacity, political risk at the highest level, etc. In this tumultuous environment, businesses have also had to deal with tighter credit conditions from banking institutions.

Restrictive credit conditions in times of crisis is not unique to the emerging world, the subprime crisis being another example. In these circumstances, the bond markets can provide an alternative to bank financing, providing businesses with some breathing space. This is according to Alan Greenspan, the former Chairman of the US Federal Reserve, who went as far as describing the bond markets as a "spare tyre" in 2000.

In this study, we question whether the bond markets have actually played the role of a “spare tyre” for emerging market businesses during the recent period of slowed growth (or even recession). The answer is a priori less obvious than in the case of advanced economies, as the development of corporate bond markets is incomplete there. This year, however, marks the twentieth anniversary of the Asian crisis, which revealed the dangers linked to the financing of businesses exclusively dependent on banks.

Finally, in the 16 emerging market economies, bond markets seem to have offered a breath of fresh air to businesses in several countries in Asia (Thailand, Indonesia) and emerging European markets (Czech Republic, Poland, and Hungary). This is also the case in Latin America (Chile, Mexico and Colombia), with the difference being that international bond, instead of local bond issues have increased in this region, along with the resulting risks (increased currency risk in the case of foreign currency bond issues). Finally, one of the lessons of this study is that the bond market is of no help when the economic shock is particularly violent: despite the existence of liquid and relatively large markets, the recession was accompanied by a decrease in bonds outstanding in Brazil and Russia in 2015. 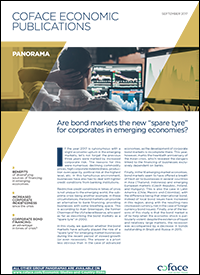 Download this publication : Are bond markets the new "spare tyre" for corporates in emer... (1.68 MB)