A few weeks after the first containment easing measures, economic activity seems to be picking up in most European countries. However, about two months after China, this gradual and partial recovery will not erase the effects of containment on growth: the depth of the recession in 2020 (a 4.4% drop in world GDP according to Coface) will be stronger than in 2009. Despite the expected recovery in 2021 (+5.1%) - in the absence of a second wave of the pandemic - GDP would remain 2 to 5 points lower in the United States, the eurozone, Japan and the United Kingdom compared to 2019 levels. The expected increase in household precautionary savings and cancellation of business investment because of persistent uncertainty about the evolution of the pandemic, as well as the irrecoverable nature of production losses in some sectors (particularly service activities and raw materials used as combustible) explain the lack of a rapid catch-up effect. Admittedly, measures taken by central banks have helped to stabilize financial markets since April, especially those of countries (especially in Western Europe) that have, so far, contributed in maintaining some companies’ production capacities, mainly by increasing debt. Nevertheless, they are also postponing adjustments in employment and corporate cash flow issues.

Despite public support measures, Coface anticipates that corporate insolvencies should increase by one third worldwide between now and 2021 compared to 2019. As already highlighted in our previous Barometer dated April 4, 2020, this trend should affect all of the main mature economies: United States (+43%), United Kingdom (+37%), Japan (+24%), France (+21%), Germany (+12%). However, many emerging economies (+44% in Brazil, +50% in Turkey) will also be disrupted by the economic consequences of lockdown measures combined with the fall in tourism revenues, expatriate workers’ remittances and revenues linked to the exploitation of commodities of which prices have fallen.

This sharp rise in the number of insolvencies reflects an increase of short-term corporate credit risk (6 to 12 months), of which Coface assesses the average level every quarter – per country, on a scale of eight notches – using macroeconomic, financial and microeconomic data. Unlike rating agencies, Coface’s Country Risk Assessment (CRA) does not aim to measure the insolvency risk of governments in the medium-term. Coface has taken into account the rise in credit risks observed during the previous quarter, which has resulted in 71 downgrades of CRA ratings, i.e. slightly more than 40% of the economies covered worldwide. The same applies to the 13 business sectors assessed in 28 countries representing 88% of world GDP, of which around 40% have been downgraded. Unsurprisingly, transport is the most affected sector because of the mobility crisis, followed by automotive and retail that were already in a weak position last year. At the other end of the spectrum, pharmaceuticals and, to a lesser extent, agri-food, the media and telecommunications segments of the ICT sector are the most resilient. 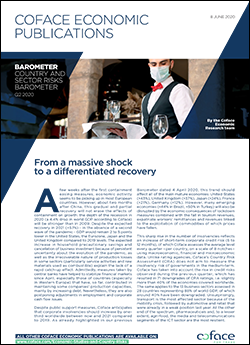