Latin America: The winners and losers of "Trumponomics"

Political changes in the US have caused uncertainty over the trade policies that could be implemented and the region’s vulnerability to tighter financial conditions.Since Donald Trump's victory, the currencies of many emerging countries have fallen against the dollar. Mexico's currency was the most greatly affected in the world, with 19 % depreciation against the USD in 2016. This is the country’s worst depreciation since the Tequila crisis in 1994. By contrast, the US stock market reacted positively following Trump’s victory announcement.

On the trade side, the possible application of import tariffs would potentially affect manufactured products. The position of Central American countries (Honduras, El Salvador and Costa Rica), as well as Mexico, is particularly sensitive (given their trade exposure to the US, which is mainly focused on manufactured goods). In addition to having large exposure to the US, the GDPs of these countries are more dependent on exports than they are for other countries in the region. Based on the assumption that Trump’s administration is expected to initially focus on countries with which the US has a strong deficit, Mexico's position appears to be the most vulnerable in the region.

Moreover, if Trump is able to implement an expansionary fiscal policy, the Federal Reserve would continue with its monetary tightening cycle, which would imply further appreciation of the USD. Among Argentina, Brazil, Chile, Colombia, Peru and Mexico, only the latter has increased interest rates in response to the interest movement. Though the risk related to the local credit market is undermined by Mexico's low credit depth. A stronger USD could also concern economies with high indebtedness in foreign currencies. So far these economies have shown moderate volatility against the US dollar. The same is also true for the risk perceptions related to these economies. 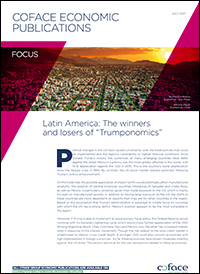 Download this publication : Latin America: The winners and losers of "Trumponomics" (698.04 kB)