While the restrictions linked to the COVID-19 pandemic put a stop to the resurgence of social movements, a new wave is on the horizon. The resurgence of mass protests, which had already been strong since 2017, mainly in emerging countries, is expected to accelerate again due to the unprecedented deterioration of socio-economic indicators.

Following the crisis, Coface's social and political risk indicator, which factors in these socio-economic criteria, reached a record high of 51% worldwide in 2020 and, more particularly, 55% in emerging countries. Social pressures have increased in some large emerging Asian countries such as Malaysia, India, Thailand and the Philippines, as well as in North African countries such as Algeria and Tunisia.

These social movements will have an impact on the economic activity of the affected countries, including on their external trade. We estimate that a mass social movement has, on average, a particularly pronounced and permanent negative impact on the affected country’s goods exports. During the year of the movement, they are, on average, 4.2% below their estimated potential. The gap remains substantial over the three following years, as they remain  between 6.3% and 8.9% lower. The shock on imports is weaker and more transitory.

The shock on trade is likely to vary greatly depending on the form of these social movements: their persistence and intensity turn out as key determinants. Our results also suggest that the shock depends on the demands of the  movement. Protests that incorporate socio-economic demands - therefore more likely to emerge after the pandemic - have, on average, longer-lasting and more severe effects. Three years after the shock, exports and imports remain 20.7% and 5.6% below their potential level, respectively. Moreover, the limited policy space available in emerging countries after the pandemic to limit the effects of social unrest on trade could amplify this phenomenon. 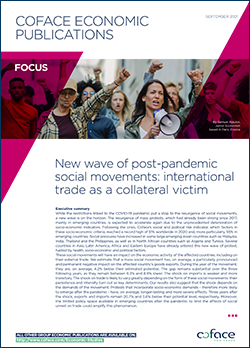 
COVID-19, a catalyst for political risks

Video: Coface's Political Risk Model: how does it work?