The United Arab Emirates (UAE) has the second largest and the most diversified economy in the Gulf Cooperation Council (GCC). Thanks to authorities' efforts to diversity exports over the last three decades, the share of the oil sector in GDP and in overall exports declined to 30% and 16% respectively in 2016 (compared with 43% and 76% in 2001). The country has become a regional hub for trade and logistics. This encouragement of new industries has helped the federation to increase its comparative advantage in sectors such as metals, minerals and plastics while also maintaining its competitiveness in oil sector. In order to promote economic integration and widen trade ties, the UAE has signed various agreements with many countries in economic, trade, investment, and technical fields. The strategic location of the country allows it to play a central role in re-exporting goods from different countries around the world towards Arab nations. Re-exports account nearly 60% of total exports.

In addition, the UAE has been prioritizing improving trade ties with China for years as the latter is one of the principal payers of the federation energy products. In 2013, China announced the Belt and Road Initiative (BRI), which is an initiative that aims to connect Asia, Africa, and Europe. The initiative has significant benefits for the UAE in terms of boosting commerce and investments, as well as accessing wider markets, especially regarding the construction, metals, trade, logistics and hydrocarbon sectors. 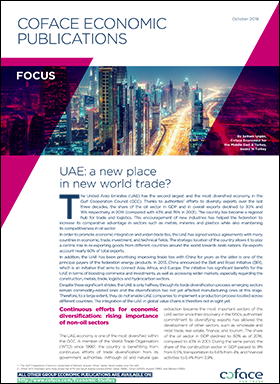