As the world's largest importer and second largest exporter of goods, the United States (U.S.) has run a trade deficit since the early 1970s. This trade deficit has regularly been a source of tension in economic and trade policy debates. Most recently, President Donald Trump's administration has reignited this debate, arguing that it costs U.S. jobs and reflects unfair trade practices by partner countries. Despite escalating trade tensions and tariffs that were intended to reduce this imbalance in trade in goods, Donald Trump leaves a legacy of a larger trade deficit to President Joe Biden’s administration than when he entered the White House four years earlier. After a year 2020 in which trade flows were disrupted by the COVID-19 pandemic, the trade deficit even reached a record high of more than 900 billion U.S. dollars (USD).

After a 3.5% contraction in 2020, Coface forecasts that U.S. GDP will rebound by 5.7% this year, which would allow the country to return to its pre-crisis level as early as mid-2021, before most advanced economies. This more powerful rebound in the U.S. than in its major trading partners is expected to be driven by an unprecedented fiscal response to the crisis: the USD 1.9 trillion "American Rescue Plan" package, passed in March 2021, will bring the total fiscal response to the crisis to an amount equivalent to 27% of U.S. GDP, more than any other mature economy. In addition, with the vaccine rollout moving forward at a high pace, a "boom" in U.S. consumption, supported by these massive government transfers and the lifting of restrictions to curb the spread of COVID-19, is expected. The positive outlook for U.S. consumption is expected to fuel strong import volumes that would contribute to a widening trade deficit. Using an analysis based on the historical estimate of a potential output trade balance, we estimate that the deficit could be as much as USD 56 billion higher than it would have been without the stimulus package. Bilateral deficits with Mexico, but also with Germany, South Korea, Brazil or India could increase accordingly. 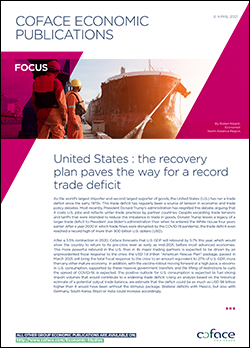 
The business insolvency paradox in Europe: miracle and mirage